Endore’s 1933 novel is a fascinating thing; part Gothic romance; part horror; part historical fiction; it successfully intertwines factual events and people with the fictional protagonists to give us a bleak metaphorical discourse on the nature of humanity.

As you can see from the back cover blurb, this is being sold as a rather tawdry affair. It was very loosely adapted to film twice, by Hammer in 1961 and by Tyburn in 1975, both times being given the standard ‘creature feature’ treatment, which is a shame as this novel really is a long way from that.

Like all good Gothic novels Endore begins with a framing device to set the stage; this takes the form of a young American man living in contemporary Paris while diligently working towards his Ph.D. This unnamed young man is visited by Eliane, a friend from America, who convinces him to take her on a debauched tour of the Parisian nightlife. Here the central theme of duality which runs through the novel is introduced, he is reading Lucretius’ Epicurean text ‘De Rerum Natura’, she is reading the 1920’s sensational flapper novel ‘Flaming Youth’. He is sobre and serious, she is wild and intoxicated. He is guided by rationality, she is guided by instinct. He is decidedly human, she is rather wolfish.

It’s during this brief introductory chapter that our narrator discovers an old manuscript in a pile of litter. The manuscript turns out to be a report, written by Aymar Galliez, in defense of one Sergeant Bertrand Galliez for a court-martial dated 1871. Fascinated by this text, our narrator forms the body of our novel from his fleshed out investigations into the case.

The opening sequence of the main body of the novel gives us two castles, one on either side of a river, the great families of which are at constant war with each other. Now, there’s an image for the constant theme of duality. It’s about the battle between science and superstition, cruelty and kindness, savagery and civilisation, the rich and the poor. It’s to this violent world that is born Bertrand, the bastard son of an innocent 14 year old serving girl and the brutal priest who raped her during a thunderstorm. Of course, Endore has young Bertrand as the linch-pin of the novel; a character which, being both man and wolf, exists in a constant liminal state between these extremes.

We follow Bertrand and his adoptive uncle, Aymar, through that mid-19th century period of massive Gallic political turmoil. Beginning with Aymar’s injury in the brief 1848 revolution, through the Franco-Prussian war to the rise and fall of the Paris Commune, culminating in the terrors of the Bloody Week.

This is a true horror novel, in all senses. Endore appears to know his subjects well; the atrocities we become witness to during the battles for Paris, the battles between the new and old orders, are truly horrific and horrifically true. The wholesale slaughter, the executions, the paranoia led proletariat, the baying mobs, neighbours turning against neighbours, the wealthy corruptibles using the situation to their own advantage. The 20,000 or so people brutally killed during and following The Bloody Week. This is where the horror is and Endore, famously being a politically aware author, pulls no punches in depicting it.

Although this is a tale about a werewolf, the activites of the cursed Bertrand pale into insignificance when compared to the horrors surrounding him in a Paris at war with itself. In fact, the relationship between Bertrand and his lover Sophie, although marred by physicality, acts as a point of purity and sanity in an otherwise broken world. Bertrand’s wolfish behaviour is merely an instinctive need to feed, he becomes an innocent within the artifice of the political machinations surrounding him.

Ultimately, in the extraordinary bleakness of this novel, all pretence of duality is lost. Whether considered good or evil, a follower of science or superstition, rich or poor; we are all as one at heart. As soon as the thin veneer of civilisation has crumbled, we are all vicious beasts ready to rend and tear one another. We all have a vestigial beast within us.

We are all werewolves.

As I’ve said in previous posts, I started collecting these old horror paperbacks when I was a boy in the late 1970s. I was well aware of Dennis Wheatley at this time as I had his book ‘The Devil and All His Works’ on a semi-permanent loan from our local library (remember that wonderfully atmospheric Goya cover of the Devil in his guise as a Black Goat dancing in the middle of a witches’ Sabbath?). I also had several of Wheatley’s paperback novels as they were so plentiful at the jumble sales and junk shops I purchased my books from with my meagre pocket money.

Far more difficult to acquire at the time were the mysterious series of books under the title of Dennis Wheatley’s Library of the Occult, these were the ones that set my imagination racing. These were books I would only catch rare glimpses of, and I only managed to nab a few of them in my younger days, but they did always contain a list of other books in the series. All those wonderful titles and each with an introduction from Wheatley himself. I was convinced that if I managed to find and read the entire series I could indeed become a master of occult forces. However, knowing what I was like as a 10 year old, it was probably for the best that the whole series, and thus the mastery of Magick, eluded me.

Over the years I have continued to collect them and I thought it was about time I included the whole series of 45 books here in the Churchyard. One book at a time, of course.

As can be seen in the wonderful image below of the promotional pamphlet for the series, 400 books were in consideration for the ‘Library’ and it was intended to continue into the 1980s. Sadly, Wheatley passed away in 1977, so we have just the 45 books published between 1974 and 1976. Still a wonderful legacy though.

Many thanks to Charles Beck who runs the wonderful resource for all things Dennis Wheatley at www.denniswheatley.info for the loan of this image.

So, starting at Volume 1 in the Dennis Wheatley Library of the Occult, we have that classic of vampire literature, Dracula. Do I need to say that it’s by Bram Stoker?

There’s really not much that I can say about this novel that hasn’t been said a hundred times before, which is why I’m conveniently using it for the introduction post to the series.

What does strike me about this novel is that I can’t think of a novel prior to this one which is built around a small band of adventurers, each with their own particular skill set. This is something we’re very used to today, it’s a staple of films and tv series (just look at that other great work of vampire fiction ‘Buffy’), but was there anything similar before Dracula? Obviously we have individuals or pairings, like Holmes and Watson for instance, but were there any other small bands of disparate characters coming together to battle the forces of evil before Stoker? Obviously we have older tales such as those of Robin Hood or the Arthurian cycle but I’m struggling to think of any ‘modern’ novels. I’m sure there must have been, but none spring to mind at the moment. 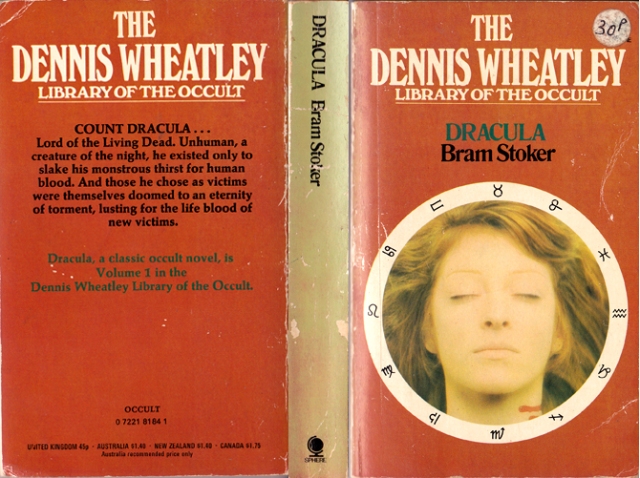