We all love a film tie-in in the world of tawdry horror paperbacks, don’t we? Whether it’s a novelisation of the film or a re-issue of a novel with the artwork (and often the new name of) the film adaptation.

I have a fair few of these tie-ins on the shelves so I thought I’d perhaps share them here. I will be discussing both the film and the novel in these articles and they will contain spoilers. 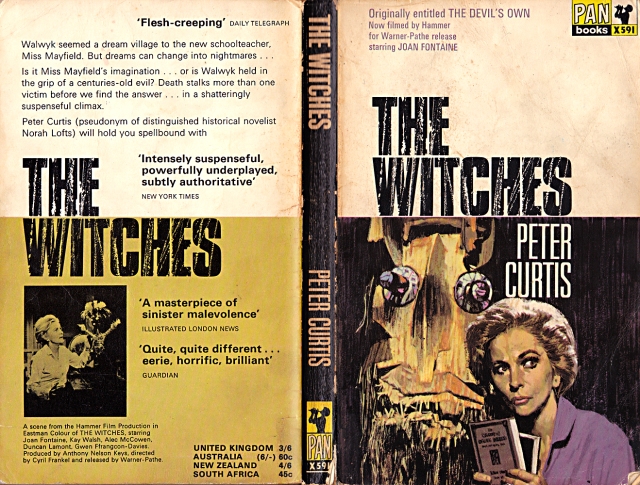 First up, we have The Witches by Peter Curtis, first published in 1960. Now, The Witches was the name given to the novel on the release of the film in 1966, it had the original title of The Devil’s Own. In 1970, Corgi published it with the title of The Little Wax Doll. Various online sources also state that it was published under the title of Catch as Catch Can but I can find no evidence of this at all and it just goes to show the dangers of people writing articles rehashed from Wikipedia entries. Having said that, if anyone out there can refute this and has a copy of the novel with the title Catch as Catch Can, then please do get in touch.

Just to muddy the waters further, the stated author, Peter Curtis, is not Peter Curtis at all, but the nom-de-plume of the historical fiction author, Norah Lofts.

That’s a long-winded way of saying the source novel is The Devil’s Own by Norah Lofts and it was adapted into the film The Witches by Hammer Film Productions in 1966. 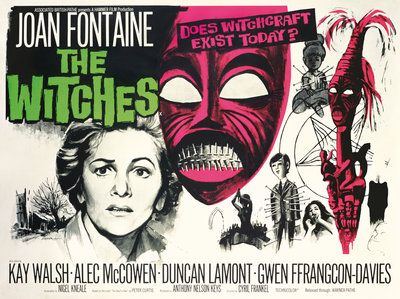 The plot revolves around Deborah Mayfield, a teacher recently returned to Britain after a twenty year stint working at an African mission where, after several bouts of fever, she suffered some sort of mental breakdown and was forced to return home. On her return to Blighty she became a schoolteacher at a town school which she found unsatisfactory and decided to move on. We join Miss Mayfield at the very beginning of her new life as headmistress of a small private school in the tiny village of Walwyk. Within this small village Miss Mayfield begins to suspect the locals of practising witchcraft; but, is this really happening or is it a resurgence of her mental illness?

The film adequately follows the basic plot of the novel and casting the wonderful Joan Fontaine as Miss Mayfield was a clever move, she manages to convey the quiet hysteria of the character very well. I say ‘quiet hysteria’ because Miss Mayfield is a genteel woman who has spent her life moving from one cloistered existence to another; from her distant father’s house to college; from college to the African mission; from the mission to sharing an attic room with another teacher from the school she was teaching at; and finally to the rural isolation of Walwyk. She is alone in the world with no family and her only friend, Rose, still 7000 miles away in the African mission.

We then move on to the secondary character of Canon Thorby. Thorby is the head man in Walwyk, he owns the school in which he employs Miss Mayfield, in fact he owns most of Walwyk. He holds service in the church and he oversees the running of the village. He is a strong minded character; he has to be, his sister leads a coven consisting of, what seems to be, half the people in the village and it’s down to the good Canon to keep things on an even keel to avoid the scandal of discovery and the ultimate destruction of the village.

Thorby is given a peculiar twist in the film; renamed Alan Bax, he wanders around in the guise of a priest but this is only a pretence. Not a pretence in a sinister way, as we may expect, merely that he failed at becoming one. So now Thorby/Bax is a tragically weak character under the domineering thumb of his all-powerful occultist sister. Thorby/Bax doesn’t even have a church in the film, Walwyk church is a crumbling ruin. The keen eyed amongst you may recognise the ruined church from The Blood on Satan’s Claw, both films used the remains of St. James’ church at Bix Bottom as a location. Of course, Michelle Dotrice seemed to be a regular at Bix Bottom, appearing in both films. Here’s a still from the film followed by a photo from my own visit: 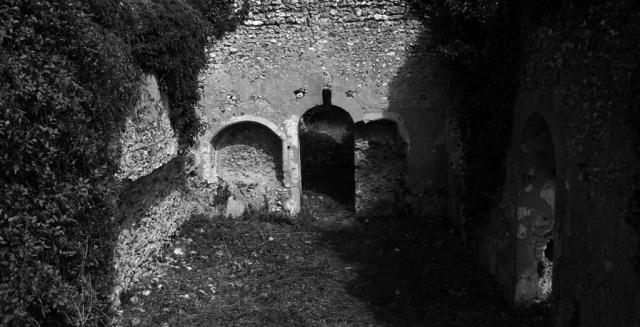 So, how does the novel and the film differ in the handling of the story? Nigel Kneale adapted the novel for the screen and, thematically, this should have been a perfect vehicle for him but it just doesn’t quite work. It’s not a bad treatment of the source material but with Kneale on writing duty this should have been a classic of the first water. As we know from works such as The Quatermass Cycle, The Stone Tapes, Murrain and Beasts, Kneale likes to lift the slab of folklore and superstition and have a root around underneath, whatever crawls out he usually juxtaposes with a psychological reasoning and manages to offer both the instinctive and the scientific, the ancient and the modern, on a perfectly balanced and equal footing. Dealing with themes of isolation, landscape and ancient belief systems, The Witches should really have been a film mentioned in the same hallowed, folk-horror tainted breath as The Wicker Man, Robin Redbreast, The Blood on Satan’s Claw, et al; whereas, unfortunately, it just doesn’t reach that standard.

The film never reaches the levels of claustrophobia and paranoia that Lofts achieves in the novel. A large part of this is the decision to give Miss Mayfield a car in the film. The novel relies on her being isolated, she is a stranger trapped in a village surrounded by miles of East Anglian flatlands. At the beginning of the novel the taxi driver taking her to her new home in Walwyk offers a potted history of the village and the surrounding landscape; how Walwyk was an island until the marshes were drained; how there were wolves in the woods long after they had been killed off in the rest of the country; how the villagers are “…still kind of cut off – in their minds, I mean”. To enter Walwyk there is just one road and this road crosses a bridge. This bridge makes two appearances in the novel, once near the beginning and once near the end; it acts as a liminal hinge, a threshold between one reality and another, in much the same way as the bridge in Murnau’s Nosferatu which Hutter crosses with the intertitle, loved by Andre Breton:

And when he crossed the bridge, the phantoms came to meet him.

And, as with Nosferatu’s Hutter, the phantoms come to meet Miss Mayfield. Not only the phantoms of the village but her own phantoms too.

Of course, with Miss Mayfield having her own vehicle in the film, all this is lost. She becomes a modern woman and has the ability to simply drive away. And it’s touches like this that detract from the novel’s underlying theme of the loss of tradition in the face of modernity. This theme is seeded throughout the novel and, more explicitly, at the very beginning of the film where we are shown the final experiences of Miss Mayfield’s time in Africa, working at the mission during a violent insurgency. Lofts was, of course, referencing the Mau Mau uprising which occurred during the 1950s where there was a revolt against the colonial forces by the Kenyan people. Although the revolution was primarily concerned with the unfair land expropriation committed by the colonials the British propagandists played on the perceived primitiveness of the Kenyan people and claimed they were:

…an irrational force of evil, dominated by bestial impulses…

Of course, this can be seen to be mirrored on a much smaller scale in the people of Walwyk. A small isolated community with its own ways, terrified of a steadily encroaching modern world which is ready to sweep them away in the name of progress. The post-war economic boom caused a massive expansion of the urban landscape and many villages were swallowed, and still are being swallowed, by this spread. Around Walwyk we have the local towns extending their reach and attracting the young Walwykians to their bright lights and wicked ways. Of course, anyone who attempts to flee the village or reveal any of the village’s secrets comes to untimely end at the hands of the head witch, Granny Rigby. During the course of the novel we have the Baines family’s run-in with the local coven; Emily Baines is forced into hiding with her son in London after the ritualistic slaying of her husband by the locals. Emily, on learning that Miss Mayfield is attempting to expose the activities of Walwyk sends her a letter which Lofts uses to neatly tie together the analogous nature of the Kenyan and the Walwykian:

“Emily Baines, a somewhat unwilling convert to the dark creed in the first place, had relapsed and deserted, but she had taken with her what she had learned. ‘I should know and it’d be the worse for you.’

Holding the neatly written sheet, she pursued the analogy. It was the letter of a Kikuyu forced to take the Mau Mau oath and aware of its potency, who yet felt that he owed a little allegiance to some European who had been kind. She said it. ‘You were kind when I was in trouble.’”

Being a folk-horror, imperiled outsider novel we know that the story is building towards the grand ceremonial climax. And it doesn’t disappoint. The coven gathers in the local church for their orgiastic finale on All Hallows Eve and it’s a race against time for Miss Mayfield to defeat them. Crucially, she intends to do this by using the very thing that the insular community are most afraid of, technology and modernity. She intends to hide herself away, film their “bestial impulses” on a recently purchased cine-camera and expose them to the outside world. This leads to a strangely ambiguous ending which I will not spoil for you.

Now then, I suppose we should discuss the end of the film. As I said before, it’s really not that bad a film, but it has unfortunately become somewhat infamous for the risible nature of the climactic ceremony. It really is quite a bizarre thing which, as most people agree, resembles more of an oddly choreographed interpretive dance sequence than a terrifying occult ceremony. The soundtrack to this is created by braying horns, pounding drums and the assorted grunts and groans of the amassed congregation. However, to highlight the interpretive dance aspect of the scene I removed the original soundtrack and overlaid a suitable piece of modern jazz from the period to see how it worked, in this case Dave Brubeck’s Unsquare Dance. Personally, I think it works quite well.

I shall leave you with this: