(The Amicus Cravatalogue was a short, five part article I wrote for another blog a few years ago. As the other blog will disappear shortly I thought I’d include them here. This is Part 5)

Well, here we are. We’ve arrived at the last post of the Amicus Cravatalogue, wherein we’ve looked at every single cravat in the series of portmanteau horror films produced by Amicus in the 1960s and 1970s.

For those Johnny- come-latelies amongst you, here are some links to the earlier episodes:

We’ve reached 1974 now and the final film in the series, the magnificent From Beyond the Grave. Sadly, 1974 was a grim year of political uncertainties in Britain. The first post-war recession hit, the three day week was introduced, there was an escalation of the Irish ‘Troubles’. There just didn’t seem to be any room for the humble yet extravagant fashion accessory in this world, the cravat was finally being sidelined.

Still, keep a stiff upper lip, on we go.

The linking story here is that of an antique shop called Temptations Limited run by who else but Peter Cushing (quite fitting that he should be the linking pyschopomp character in the first and last films of the series). People visit and procure certain objets d’art from the shop and once taken home these items hold a supernatural sway over their new owners. Interestingly, they up the morality tale odds in this final film as those with good intentions fare better than those with bad.

The first tale has a cravatted David Warner purchasing a mirror for his swanky apartment:

Whilst hosting a party his guests suggest holding that most ’70s of party pass-times, a seance. We just know this isn’t going to end well, don’t we? And indeed it doesn’t, after the seance a mysterious figure materialises to Warner in the mirror and begins to take control of him with murderous intent – the bizarre form of Marcel Steiner in 19th century attire, complete with a black silk cravat: 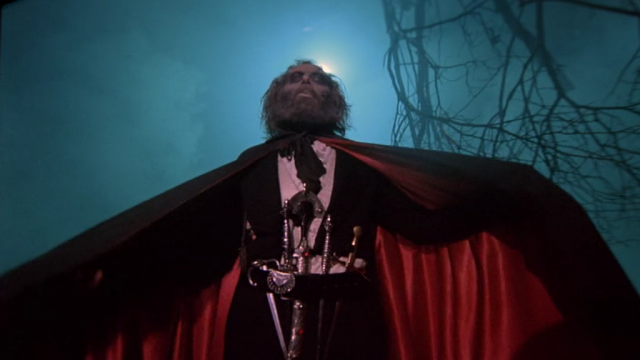 The second tale concerns a frustrated middle-management chap (Ian Bannen) with a complete lack of control over his life who poses as a war hero to a down-at-heels ex-soldier scratching a living as a match seller (Donald Pleasence). No cravats here I’m afraid, but it does boast a wonderfully pyschotic performance from Donald’s real-life daughter, Angela Pleasence. The film is worth the entrance fee to experience Ms. Pleasance’s singing alone.

The third story gives us Ian Carmichael unwittingly taking an elemental spirit home with him after purchasing a silver snuff box. I know what you’re all thinking…”Ian Carmichael, surely he’ll be wearing a cravat?”…but, alas, no. He’s merely a sensibly dressed businessman in a suit and tie in this one.

In the final story Ian Ogilvy purchases an elaborately carved wooden door which he thinks will look splendid on his stationery cupboard. Unfortunately, Ogilvy is unaware that the door once belonged to a  17th century occultist (played by Jack Watson), which gives us the only glimpse in the Amicus series of an early lace cravat, as was the style in the Restoration period: 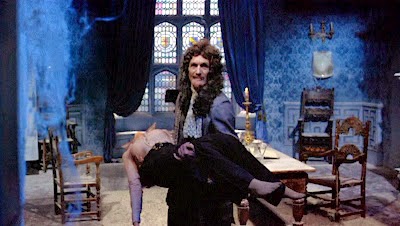 In between the stories Cushing’s antique shop is being cased by an open-collared ruffian with felonious intent. But what of Cushing himself? Unfortunately no cravat, he opts for a bow tie and scarf combination in this one. But it’s Peter Cushing, he still cuts a dash whatever his choice of neckwear. I leave you with the final scene of the final film in the cravat rich series of Amicus portmanteau horror films: 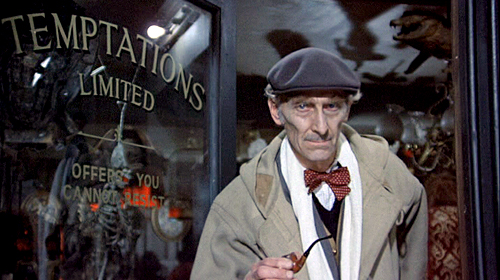 Of course, although Amicus were arguably most famous for their portmanteau horror films they made other films, and not just horror, before, during and after the series.

I feel I should give a very brief mention to their two post-portmanteau horror films here.

The first is Madhouse which features the splendid pairing of Peter Cushing and Vincent Price, both renowned gentlemen of the cravat, although only Cushing can be seen in one here: 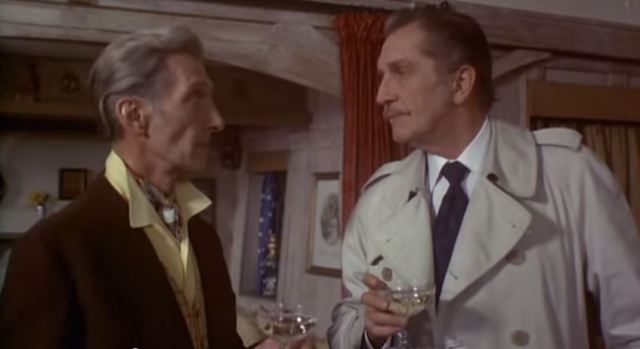 And the other, released in the same year, was The Beast Must Die. This was the funkiest werewolf tale ever told with its Shaft style electric wah-wah guitar soundtrack. Truth be told, I watched it again recently fully expecting there to be a glut of cravats but unfortunately it’s all flouncy shirts unbuttoned to the navel and hairy chests. The only cravat we get is one sneaked onto set by Peter Cushing (…of course), and then we only see the briefest glimpse of it peeping out from the neck of his extravagantly patterned pullover:

And that’s the end of our sojourn into the the world of horror portmanteau cravats. Let us put Amicus to bed now, tuck it up in its ’70s candlewick bedspread and say ” Goodnight, sleep well……..if you can!