Today we’re taking a bit of a diversion in The Churchyard. We’re taking a stroll away from the usual, neatly aligned shelves of horror paperbacks over to that dark corner, the one we rarely venture into, the one with the untidy shelves, the one we vaguely refer to as ‘miscellany corner’. There are all sorts of oddities lurking there, mostly things that are best left hidden.

The tome I’m liberating from the darkness for today’s post is Dracula Annual, published in 1972 (I think, it has no copyright page) by the legendary New English Library.

I found this one in a jumble sale when I was around 10 years old. It’s was in a sorry old state with the spine all broken and torn and the covers loose; it’s obviously still like that today, with the scraps of sellotape, now crispy and yellowed, hanging from its battle-wounds.

In truth, I had trouble connecting with it when I was ten years old. The contents weren’t exactly as advertised by the title, there being only one brief mention of Dracula in the whole thing, which was a huge disappointment for a child with an obsession for Hammer films. Instead there were just all these weird, brightly coloured images illustrating stories which didn’t seem to make much sense at all. So, the book was relegated to the back of a drawer and later, when I left my parent’s home, to a box.

I rediscovered it in my late teenage years when I learnt to appreciate the *ahem* psychedelic nature of the contents. I spent many a happy hour getting lost within page after page of hallucinatory imagery. Ah yes, it all seemed to make so much sense now!

This annual is actually a series of twelve Spanish comic books collected into one issue. And I’ve only just noticed that in my edition issues nine and ten seem to be published the wrong way around, the Wolff and Agar-Agar serials don’t follow the correct sequence! Anyway, each issue contained four stories, the lead story in every issue being the serialised Wolff. The full contents are:

This is the main serialised story of the book and the only one which features in every issue. It’s a Sword & Sorcery romp which follows the adventures of the titular hero, a scantily clad barbarian with a penchant for furry boots and decorative pants. The story opens with Wolff returning to his tribal home after a hunting trip to find his village ransacked by The Witches. The young and the beautiful, including Wolff’s own wife, have been captured and all the rest left for dead. Of course, this sets in motion a tale of revenge as Wolff attempts to rescue his wife from the clutches of the enemy. It all borrows very heavily from Robert E. Howard’s Conan series and they don’t even hide the fact; on the second page we see Wolff invoke the name of Crom, a deity familiar to anyone who has read Conan.
The artist, Maroto, went on to considerable success with Warren Publishing, having work published in their horror titles Creepy and Eerie. 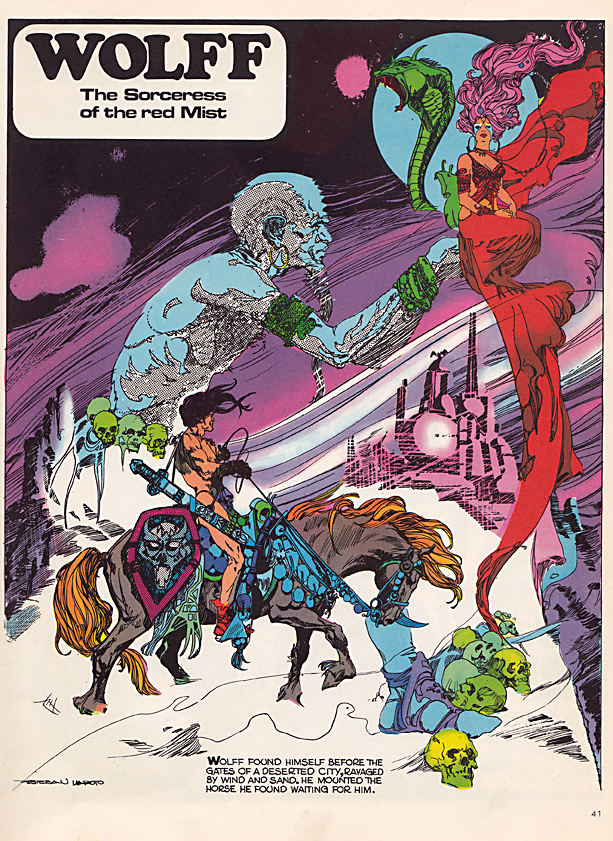 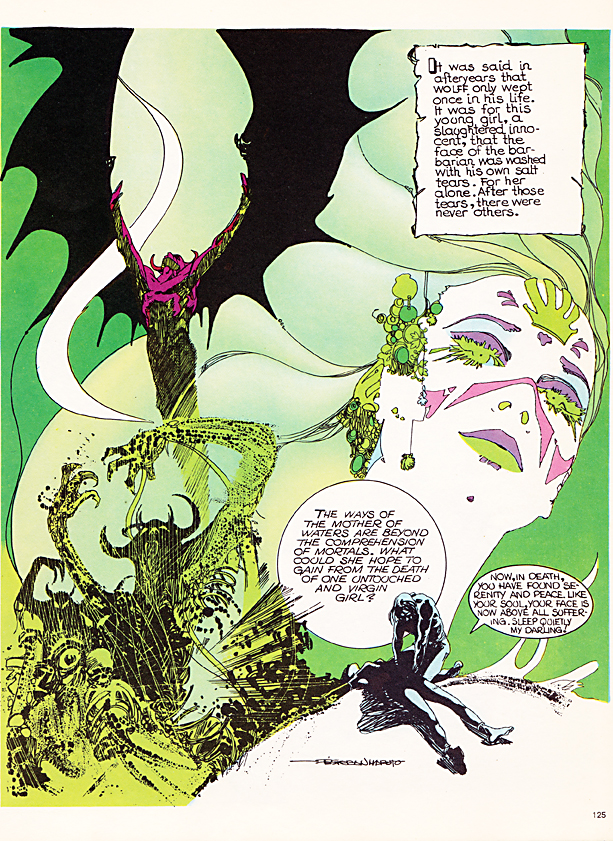 Sir Leo Wooldrich is a late Victorian English aristocrat who has rejected his social postion in favour of a life of adventure, a life of seeking out mysteries, a life of battling inhuman forces. He is very much in the mould of William Hope Hodgson’s Carnacki and Algernon Blackwood’s John Silence, those early occult detectives we all love so much.
These tales are mostly stand alone shorts and we see Sir Leo battling a variety of evils, including a hint of Lovecraftian terror when we see our hero consulting The Necronomicon in preparation for battle with one of the ‘Dwellers Beyond Space’ (an unnamed creature but possibly supposed to be Yog-Sothoth?).
Sir Leo’s mentors are a pair of occultists with an expertise in Demonology, their names are Haining and James. The author doesn’t seem shy of dropping allusions in here and there (I’ve already mentioned Lovecraft, there’s also an obscure reference to an early comic strip when he mentions Mehitabel and he even speaks of Charenton Asylum, the last resting place of The Marquis de Sade). So bearing this in mind, I wonder if he’s referring to others in the realm of supernatural fiction with mention of Haining and James!
The creator of Sir Leo is José Beá, another stalwart at Warren Publications. As you can see from the contents list, he also produced a few one off Gothic horror stories for this book. 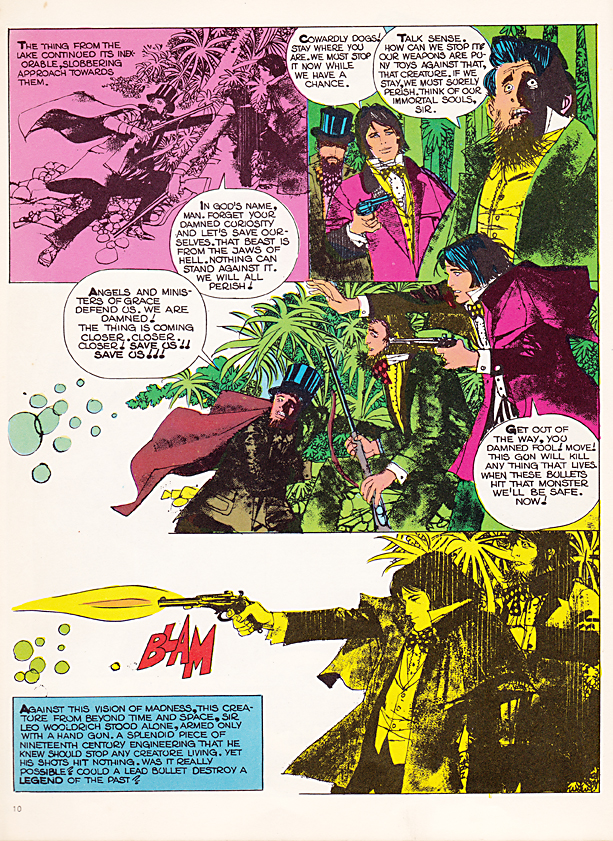 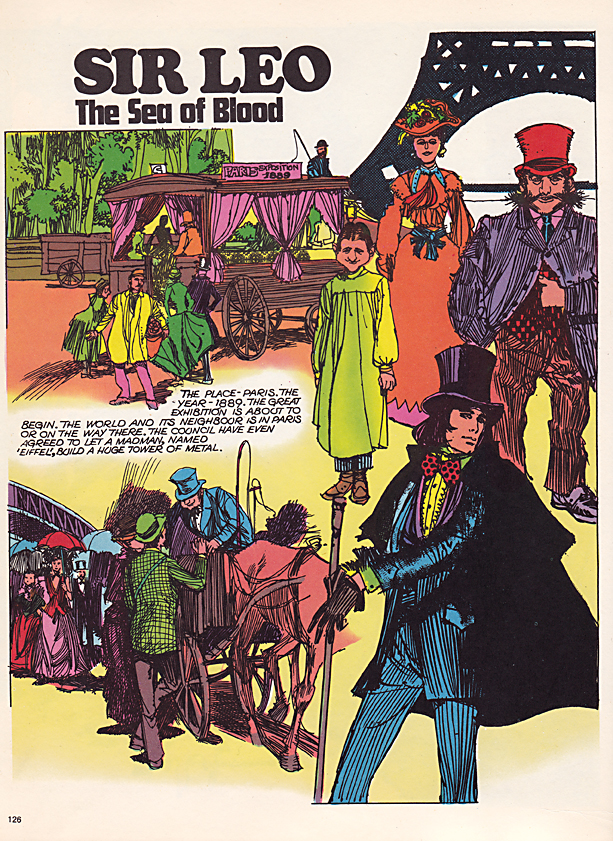 Now then, where do we start with Agar-Agar? I just can’t put into words how much I loved this story in my teenage years. She is a psychedelic sprite who lives on a star called Xanadu, one of the smallest in the galaxy of Agramente. Oh yes, and her name, Agar-Agar, it means love. Each episode sees her entangled in some adventure or other and making the male of a species fall in love with her. She, of course, falls in love with them too, but only for a short time because in her own words:

“I cannot promise to wait for you for we sprites are too fickle, too fragile. Like butterflies.”

Or, this pearl of wisdom:

“And so Agar-Agar and her blue prince ride into the cloud land of tomorrow, lit by the gold of the stars against a purple backdrop of the night. They are happy, but the sprite knows that a state of bliss lasts only like the dew on an early morning rose. It is soon gone, but it is pleasant while it lasts!!”

So, it’s free love all round in this surreal, hallucinatory and mind-expanding world. And while she’s travelling the psychedelic byways she also finds time to complete her task of saving her homeland from the evils of consumerism. In the final climactic battle she defeats (or rather talks her Blue Prince into defeating) the Seven Headed Dragon of Consumerism, each head representing one of the evils, Pollution, Inflation, Tobacco, Alcohol, Cars, Money and Misery.
And once the Dragon of Consumerism is defeated:

“From now on this land will be a land of happiness, where everyone can lie on the grass and think beautiful thoughts.” 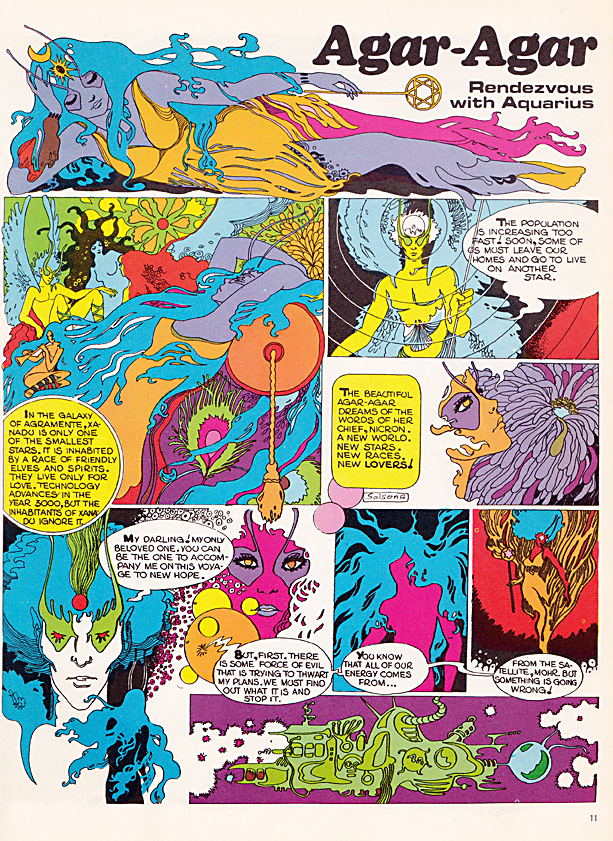 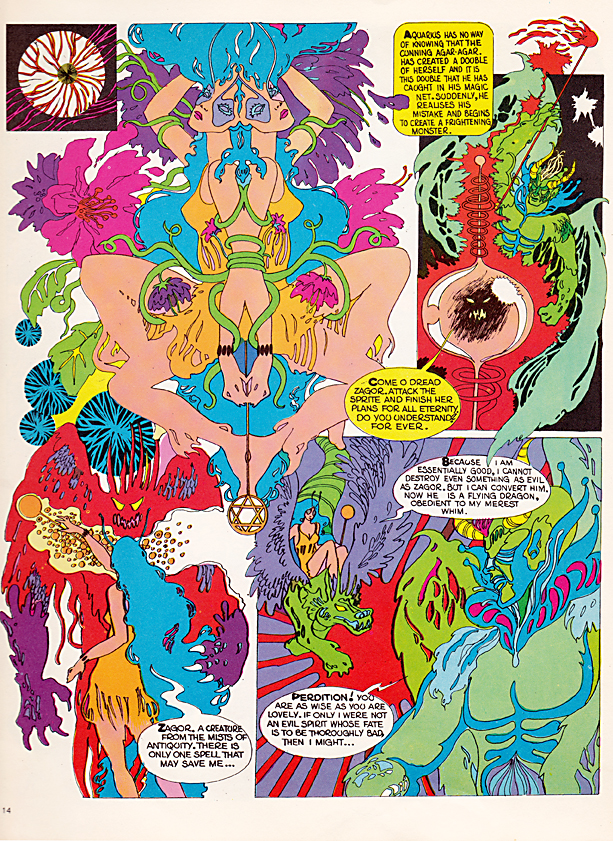 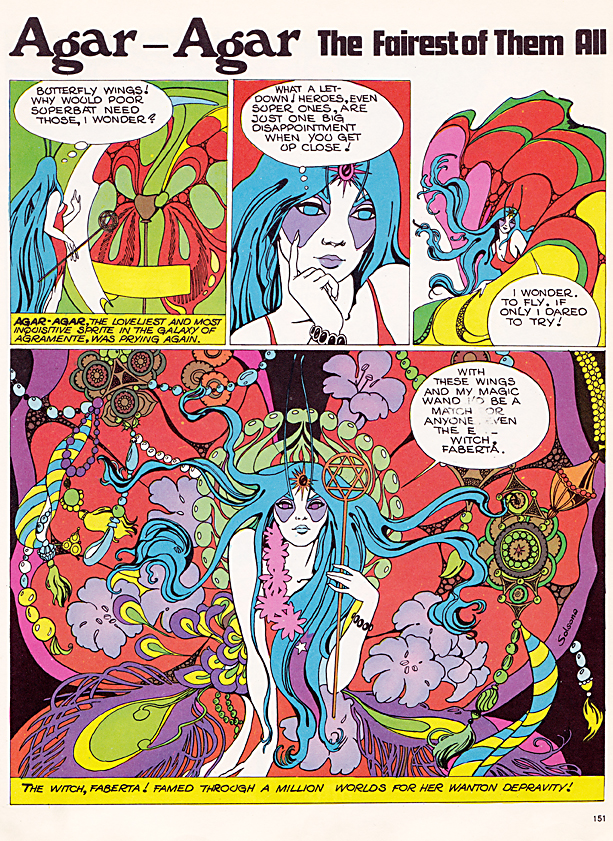 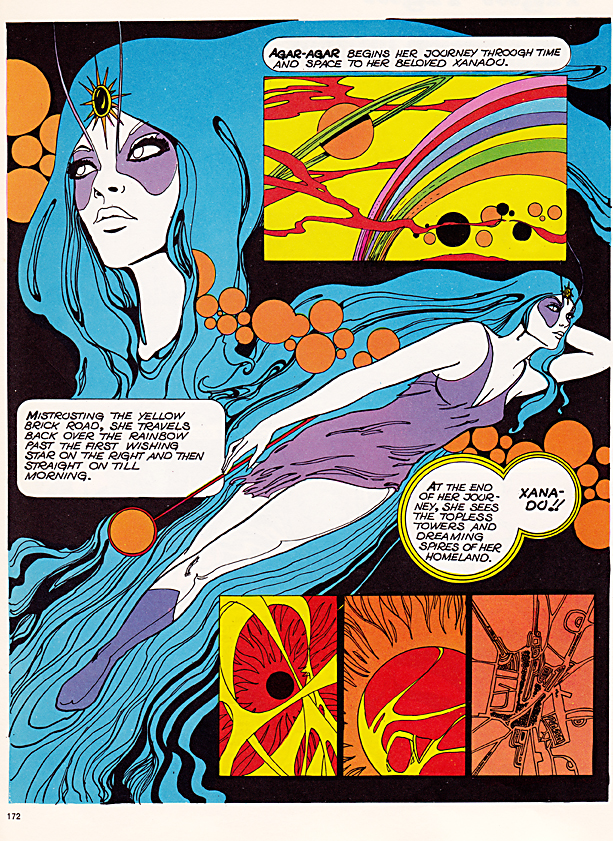 In contrast to the low-fantasy of Wolff, the slightly camp Gothic horror of Sir Leo and the…errr…whatever it is that Agar-Agar is, we have a single story in each issue by Enric Sió. These are surreal and disturbing tales made all the more creepy by his unique graphic style of inking parts of his illustration over his own photographs which adds a starkness to their terror. The visually bold world he creates is one of Giallo style horror with a slight hint of eroticism; a bleak world of strange and unnecessary deaths where nothing is resolved and nothing is explained.

Rather than a few choice pages, let us have a complete story to give you a taste of the oddness. 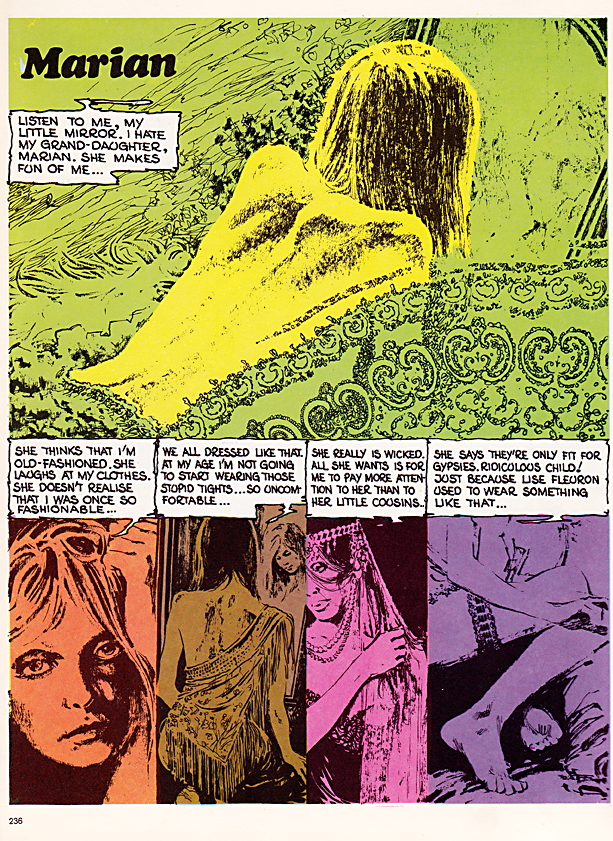 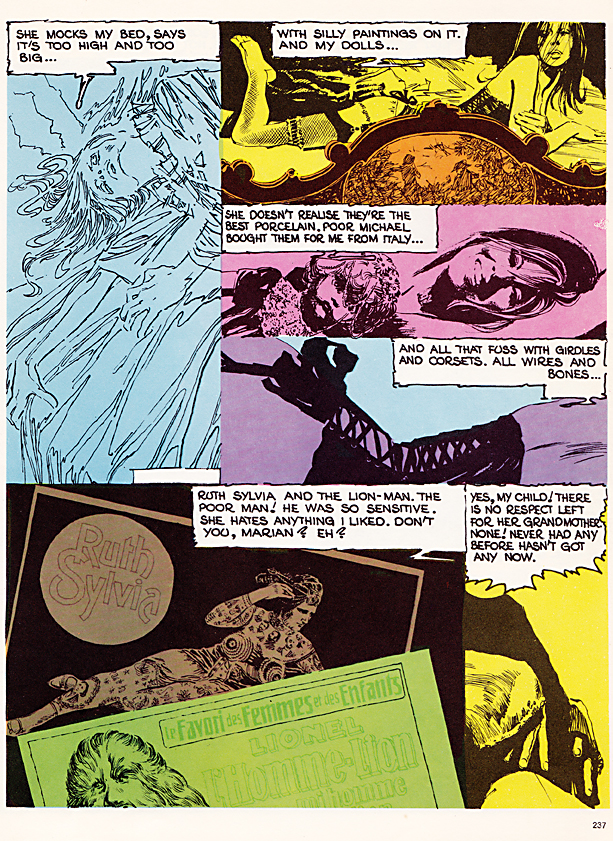 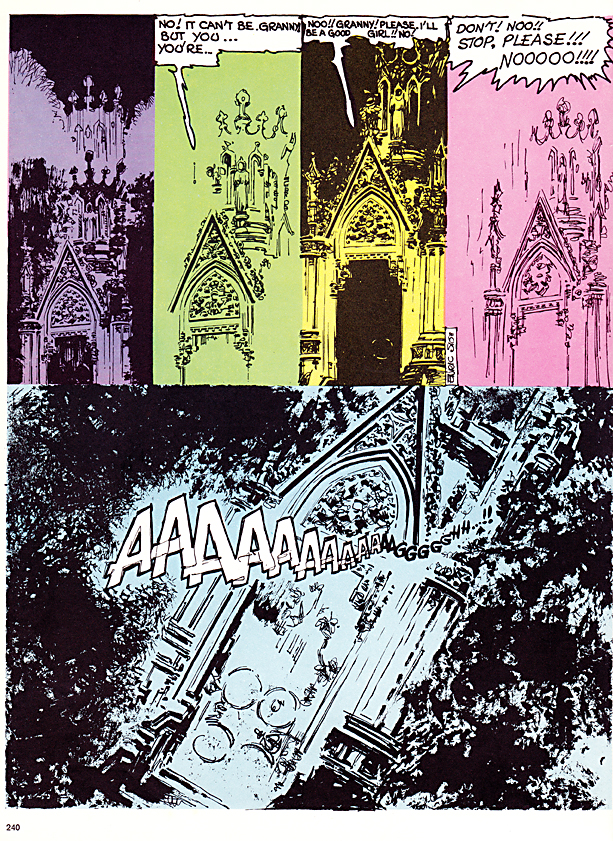 So, if you don’t have a copy of this book you could get a similar effect by dropping a few tabs of acid, putting Barbarella on one telly and Suspiria on another, Pink Floyd’s Relics or perhaps some early Gong on the stereogram and reading through some old copies of Weird Tales.

If you do have a copy of this book then you’ve probably already done all of the above at the same time as reading it. A fun way to spend an afternoon or an eternity, wasn’t it?

p.s. We at When Churchyards Yawn do not condone the use of hallucinogenics in any way, shape or form.

p.p.s. That last disclaimer may not strictly be true.