The term “The best presents are book shaped” has become something of a refrain here at When Churchyards Yawn. My wife, Samantha, always manages to seek out the best presents for my birthday and, more often than not, they are indeed book shaped. However, despite having a mild obsession with books, I’m not all about the books. I do have other interests you know.

Yes, when I’m not obsessing about books I love a bit of ephemera! And I particularly like it when Samantha buys me something that I’d never dreamed existed before. As an example, if you’re of a certain age you may recall those little black and white adverts you used to get in periodicals to advertise films; tiny little things, you used get several of them bunched together. Obviously, in the pre-digital age, these had to be printed from a printers block. It had never occurred to me before that these printing blocks may still be in existence and, as it turns out, they are! They’re extremely rare but my wife managed to find me these three for my birthday a couple of years ago:

Of course, on my birthday this year, there were plenty of remarkable book shaped presents to be opened, books which I will no doubt write about on future posts; but there was also a small box containing these wonderful little gems. 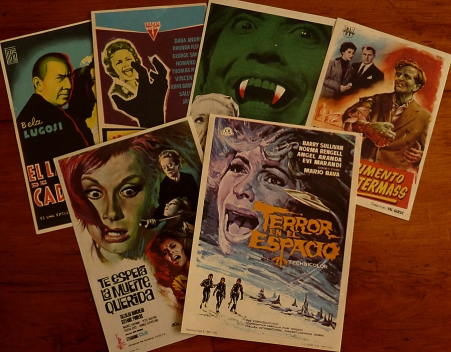 These are Spanish cinema hand-bills. Like many countries, Spain had a tradition of handing out flyers, or hand-bills, to the public to advertise attractions and events such as the circus, stage productions and bullfights. With the advent of cinema in the early 20th century, Spain naturally continued this tradition. Tiny versions of film posters were produced and distributed to the public, the back of each was left blank for the theatre to print its own details. This system of advertising continued from the 1920s up to the early 1970s, so just imagine the vast range of 20th century classic films we have the possibility of finding in this format.

However, being true ephemera, these were not made to last. Just like modern flyers, thousands upon thousand of them would have been screwed up and discarded. Luckily for us though, some managed to survive.

These are the ones my wife purchased for me:

These are all in a remarkably fine condition considering their age and the use they were put to. The seller my wife purchased them from kindly added an additional one to the package to illustrate the usual condition they are found in:

Wonderful little things, as I’m sure you’ll agree. This could be the start of a new obsession.