(The Amicus Cravatalogue was a short, five part article I wrote for another blog a few years ago. As the other blog will disappear shortly I thought I’d include them here. This is Part 1)

For the uninitiated, Amicus was a British film production company which began life in 1962 and ended in 1977. Those fifteen short years took in the best parts of the ’60s & ’70s.

The company was run by Milton Subotsky and Max Rosenberg and, being inspired by the 1945 Ealing horror film Dead of Night, they produced several of their own films in the same style. It was these ‘portmanteau’ films that they became most famous for.

What interests us here though, apart from how utterly brilliant the films are, is the preponderance of cravats we see through the seven films. Ok, their appearances start off slowly but they build to quite the crescendo in the early ’70s…as we shall see.

This is Part 1, in which we shall examine the first two films.

We’re in 1965, the era of the sharp Italian suit and the slim tie, as can be seen by this photograph of the main characters in the train carriage in which the linking story takes place. Note Roy Castle as the fashionable young jazz trumpeter, there’s a man with no interest in a cravat:

However, we do still have the occasional glimpse of a cravat.

Peter Cushing for example, as the eponymous villain of the piece, dons a very Baudelairian cravat in black silk (…what else would you really expect someone called Dr. Schreck to wear?)

We then have a bit part cravat on Peter Madden as a rather surly manservant. Quite a drab affair befitting a man of his status. I think we’re seeing a theme here, that the cravat is befitting of the lower classes and the untoward; not the neckwear of a hero.

And finally for this film, we do have one of the heroes briefly attempt a cravat. But only briefly, and safely tucked away in a darkened room. But we applaud Alan Freeman for his bravery (though the bespectacled chap doesn’t seem too impressed).

Next, we spring forward to 1967 for Amicus Productions second film in the series. Again, we have rather scant pickings here and, again, it’s the villain of the piece with the cravat. This time it’s Burgess Meredith as another doctor (though I’m not sure either of them were medically trained), Dr. Diabolo.

Dr. Diabolo is a seedy little sideshow owner and it’s in his Torture Garden where the stories take place. Seedy he may be but he does offer us two different cravats: 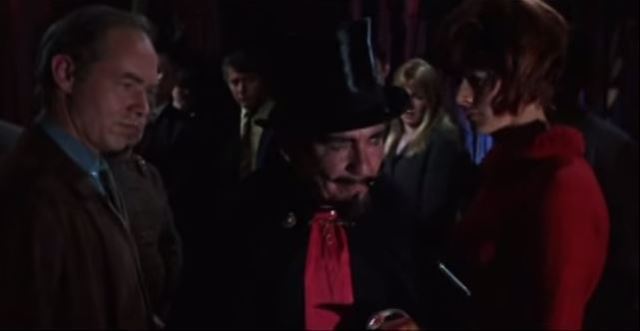 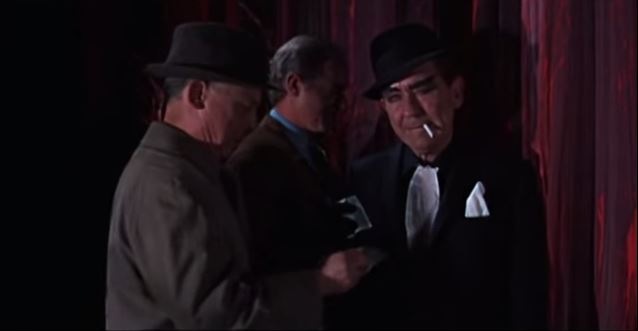 And that’s about it for cravats in this one, except for the last story in which the wonderful Peter Cushing more than makes up for it as this dapper collector of all things Edgar Allan Poe: 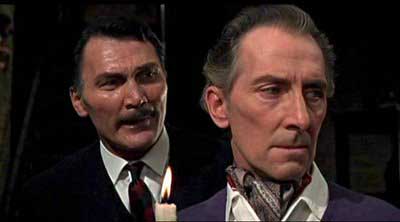 Tune in next time, cravatiers, to see Amicus really go to town with their neckwear.