One of my own today; this was previously published in DANSE MACABRE and an anthology called CORPSE ROADS.

This one has a rather peculiar and somewhat disturbing back-story. In the summer of ’76 I was seven years old. A girl lived a few streets away from me, her name was Susan Giles, I didn’t really know her as she was two or three years older than me and lived in the slightly posher houses which bordered our council estate. Obviously, being very young at the time, the actual events are just on the edge of my memory and a little sketchy as the event unfolded to me from the overheard conversations of adults and the chattering gossip of the other children in the area.

But, the basic facts are that Susan Giles was walking to a friend’s fancy-dress birthday party dressed as Little Red Riding Hood. She never arrived at the party as a man named Michael Ireland dragged her into one of the garages that lined a nearby alleyway. When Susan Giles’ body was found in the garage she had been abused, she had bite marks on her body and an attempt had been made to set her on fire.

Obviously this had a profound effect me at that age, being the first time that I can remember the monsters crawling out from the pages of the books.

And if you would like to have your own poetry featured here in The Churchyard then feel free to get in touch. Details can be found . . . HERE. 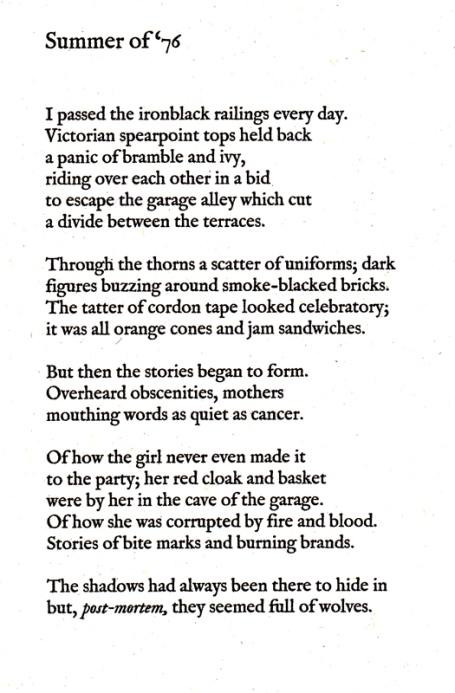